So, I am setting up my rack, but I have a problem. WIRES ARE EVERYWHERE!!!! Yes, I used velcro to deal with most of the mess, but I still had cabling issues. For thouses who don’t know, most rackmounted computers use rails that allow them to be slid in/out of the rack; like a draw. This allows the computer to be easily worked on. However, extra cabling must be left out for this to happen. This was the majority of my mess. However I was inspired by my dell server. You see, Dell servers have something called a wire management arm. This arm sits behind the server. It remains folded up until the server is pulled out. The wires sit inside of the arm, so that they will follow the server, but will always remain tightly, but never taut. 🙂 While Dell isn’t the only one who does this, it is the one that I liked the most. So I hit ebay and found some 1u wire management arms. I got 3 of them for $27. Not bad considering one can cost around $90 new. 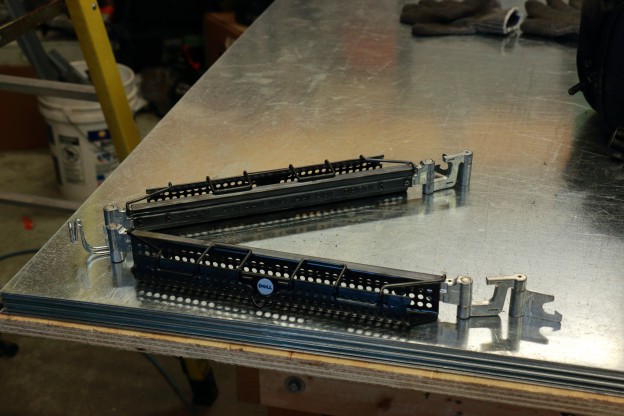 The above image shows the wire management arm. As you can see, the arm is basically a cage that you can run wires through. The top lifts up so that you can quickly access the cabling. 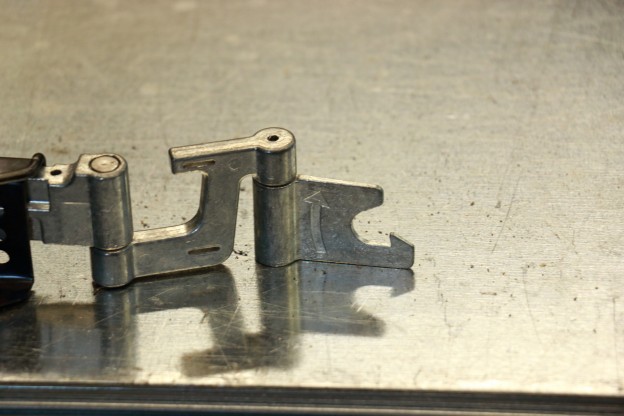 This is a close up of the mount. My plan is to replace these mounts with my own. One side will mount to the rack, and the other will mount to a pci slot cover. I chose this route over mounting directly to the case because I didn’t want to drill into my case. This would involve takings servers offline and removing the case contents. Nor did I want to samwich something between the rail and the case because I felt that that would be a pain to fabrickate.

So how does the original mount attach to the arm. 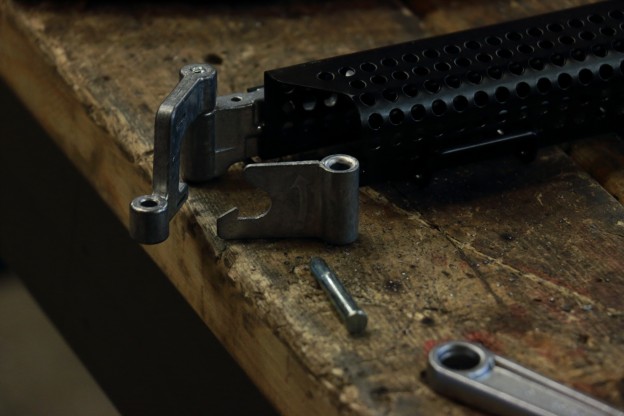 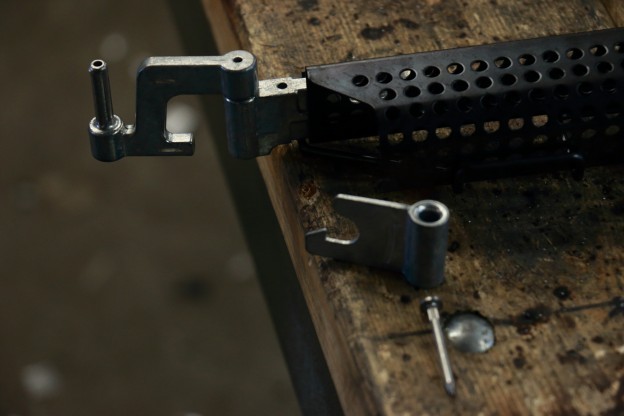 Except for that one. GGGRRRRRRR! At least it will still fit into a 1/4″ hole. So lets make that first. 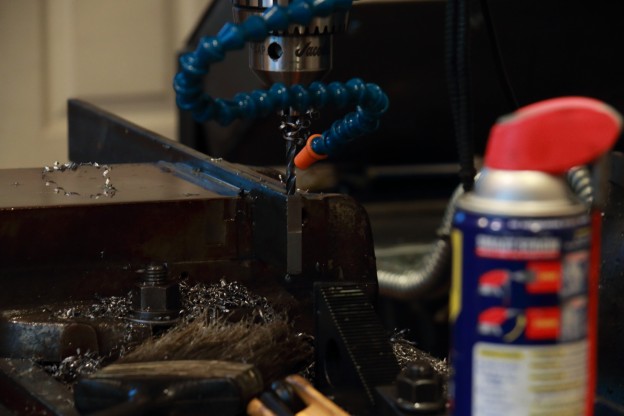 For both mounts, I am using 2″x3/8″ steel bar. I drilled the hole for the pivot point on my mill. I then flipped the bar on its side, cut out a notch for the pivot point. Drilled two holes that would line up to my rackmount, then cut the hole thing, separating the mount from the rest of the bar. I wish I could show you this, but I forgot to get a picture of it…… Oops. 🙂 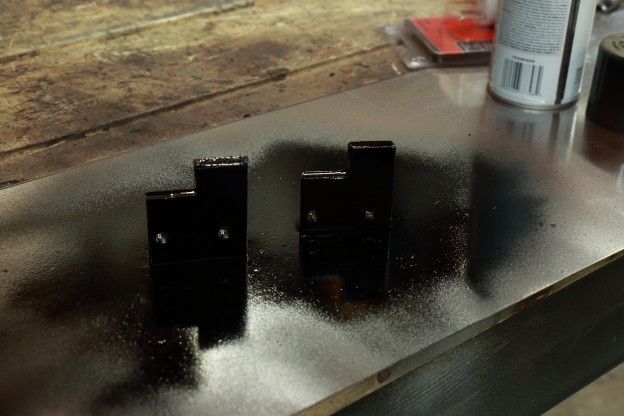 I however did get a shot of two of the mounts getting painted. Ain’t they perdy. 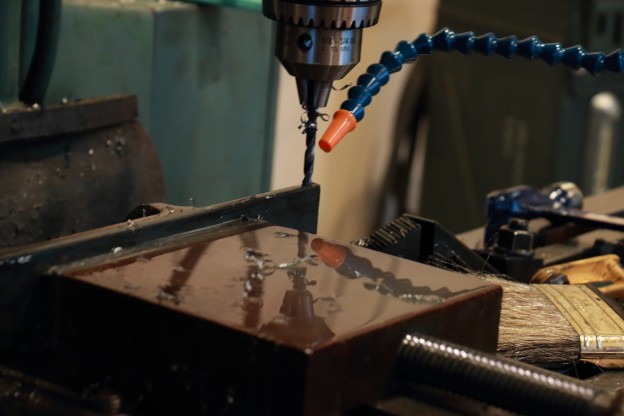 No lets get started on the other side. Again, the first step is to drill the pivot point. Please note the artful reflection in the cutting fluid. 🙂 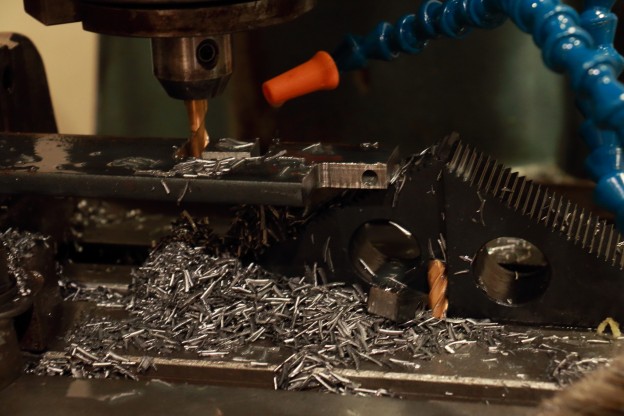 Now we cut the profile of the mount out. This mount will screw onto a pci slot cover, then drop down to the arm. 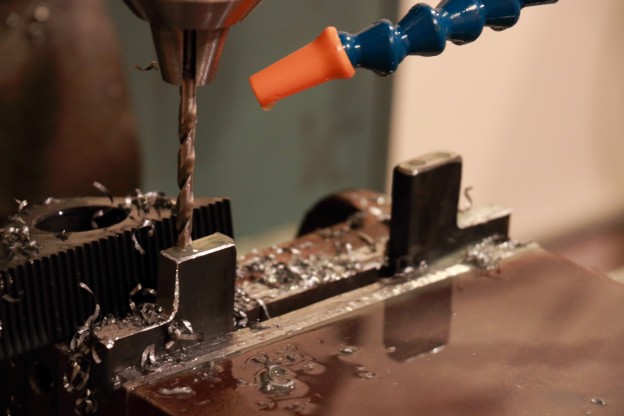 Once cut, I flipped the mounts on there backs. This was so that I could Drill two holes, then tap said holes. These holes will be where I mount the bracket to the pci slot cover. 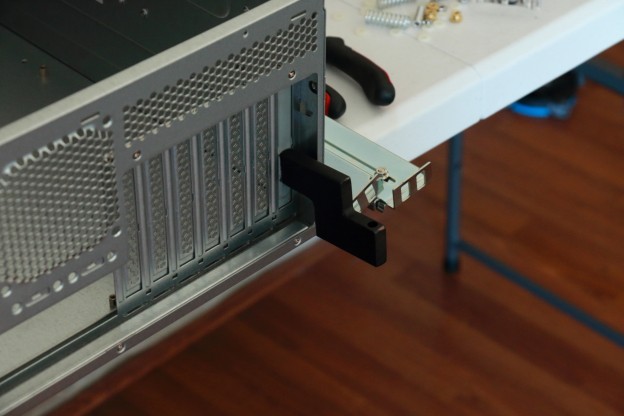 This is the bracket painted, and mounted to the pci slot. 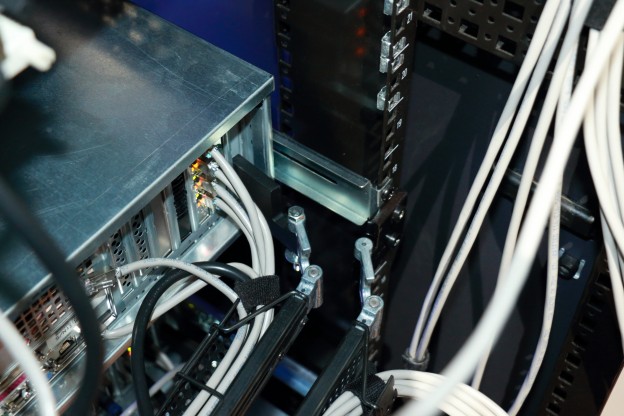 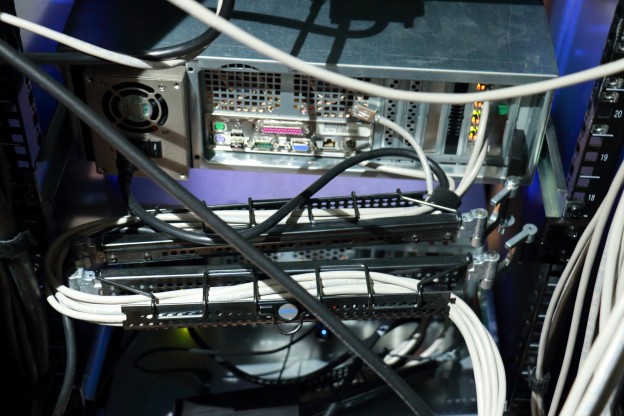 And here is the final product. But how did I attach the new mounts to the arm. Well, the mount that attaches to the rack uses the original pin. However I had a problem with the computer side mount. If I had used the original pin, the arm would be virtually undetectable. The only way would be to empty the pci slots of cards, and take out the two screws that afix the mount to the pci cover. This would be quite unacceptable. I had originally planned on putting slots into the pci cover that would allow the head of the screws to pop thru, and drop down. Unfortunately, there wasn’t enough room for this. So what I did was to drill out the pivot point in the arm, and used a 1/4″ bolt. This would allow me to remove the bolt to disconnect the arm from the computer.

Also, the pci slot covers stink. They are way too thin. This causes a bit of flex in the arm (and they were a pain to mill because I couldn’t tighten the vise enough 🙁 ). I did find some pci covers that I hope are sturdier. But I have yet to order them. 🙂