When I got my lathe, it did not come with a steady rest. Unfortunately, now I need one, so I have to make it. The easiest way to do this is to buy one of  tools4cheap.net steady rests and modify it. The reason I want to use one of their steady rests is because of their design. The steady rest and base are two separate entities. This means that all I have to do is to make a new base for this steady rest. 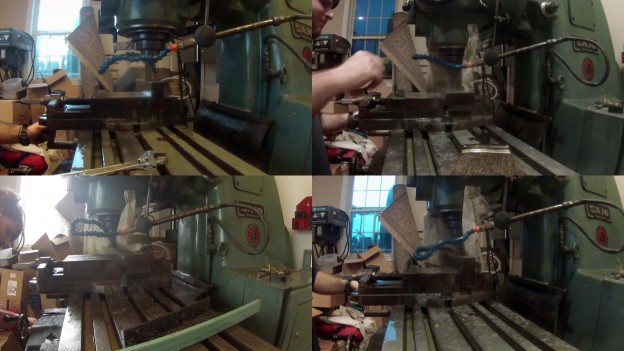 The first step is to face all of sides of a piece of steel so that I have a square spot to clamp and measure off of. 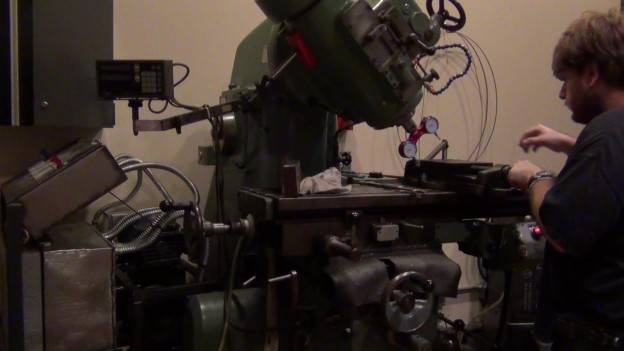 After this, I must tram the head of the mill to 45 degrees. I do this with the help of a device called a Pro Tram and a sine bar. 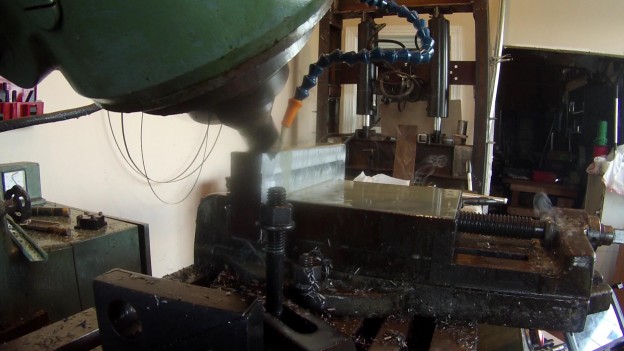 After the head is tramed, I cut the v groove with an end mill. Now to cut the flat spot on the base, I need to find out how much higher the one side is to the other. 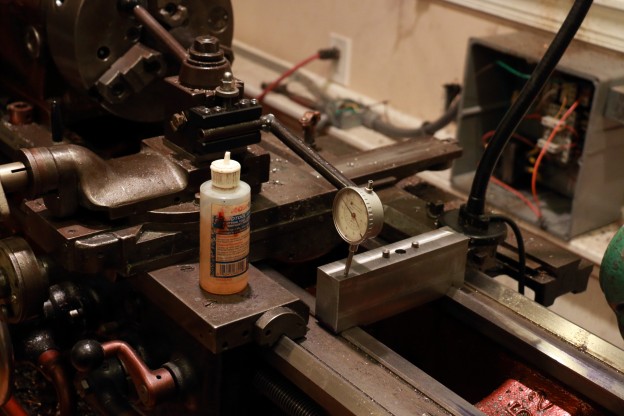 To do this, I use dial indicator attached to my tool post. I run the indicator from one side to the other. (the photo above is a dramatic reenactment) Then I go to my mill, cut a little off, then remeasured. I do this to make sure I don’t over shoot the cut. 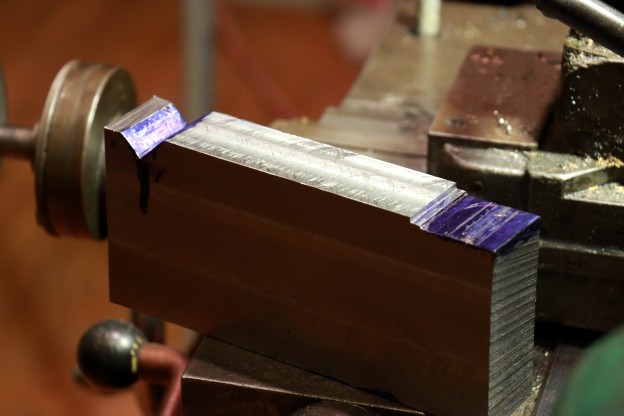 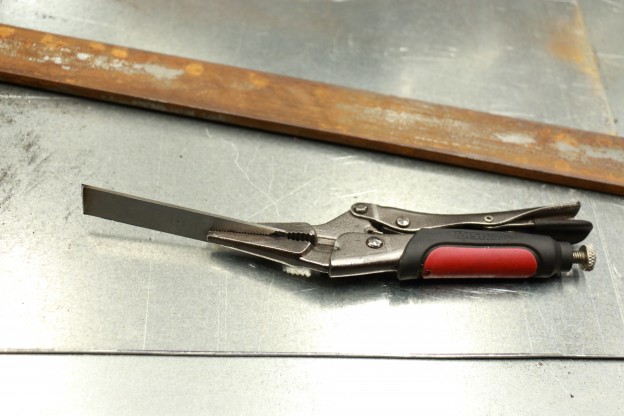 Now for scraping. I scraped the ways of the base to allow for better fitment between the base and the lathe bed. To scrape, I used a hss cut off blade with a vice grip at one end and a chisel point at the other end. To know where to scrape, I placed layout fluid on the way of the base, then ran the base along the bed of the lathe. Any shiny point got scraped, rinse and repeat. And by rince, I mean wiped the old layout fluid off. Every so often I check for levelness and straightness. If it was twisted, I would run the base on the bed, twisting it in the opposite direction. And if one end was higher, I would put more pressure at that end. 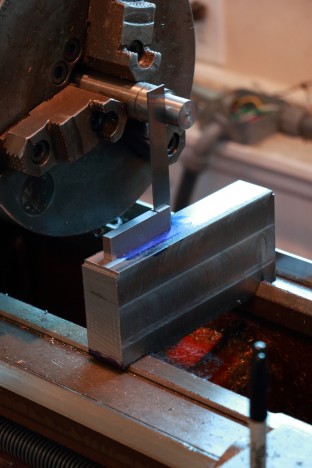 After the base is square and level, It is time to find the center of the base in relation to the chuck. To do this, I turned down a rod to a known dimension. Then I place a machinist square on top of the base, and measured the distance from the front of the base to the inside of the square. I repeated this for the other side of the rod. I dived the diference from these two measurements, then I added this result to the first measurement. This gave me center. 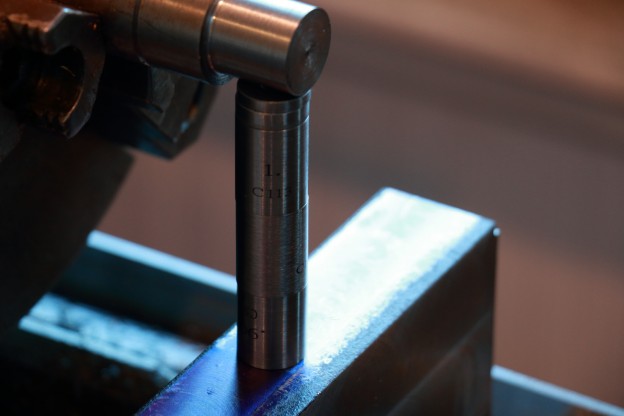 The result is the amount that I must remove from the top of my base. After removing this material I drilled a hole in the center of the base for the clamp bolt, then drilled two holes on either side for alignment pins. 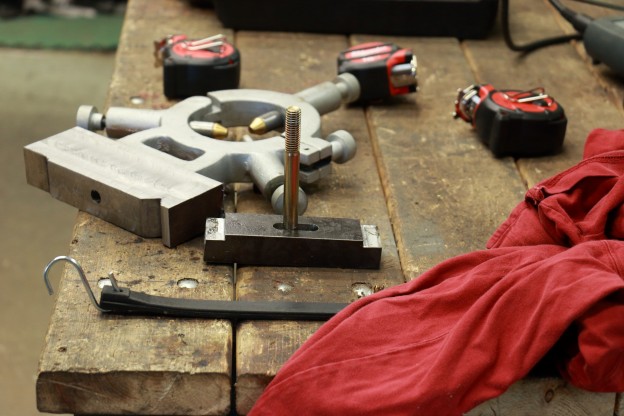 Now its time for the clamp. This was pretty simple. I just clamped a piece of steel to the bed of my mill and cut a flat spot on either side. This is where the clamp will contact the lathe bed.Then I moved the piece to the  mill vise to cut a slot in the center for the bolt. 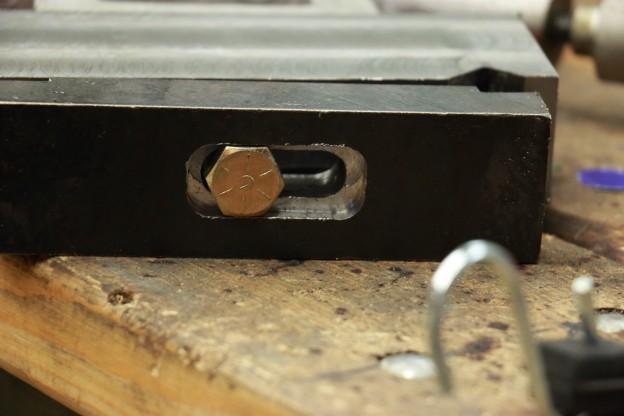 Then I cut  a bigger slot for the head of the bolt so that it doesn’t spin. 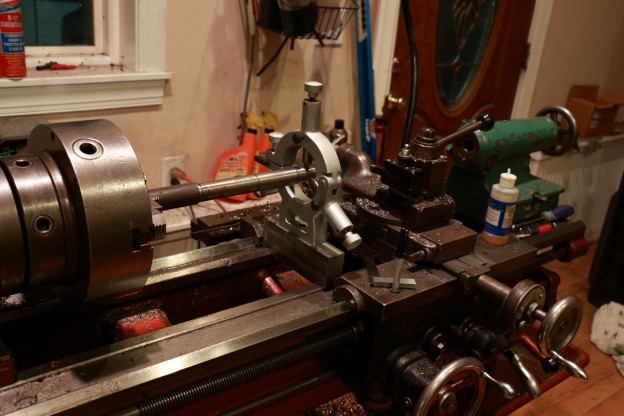 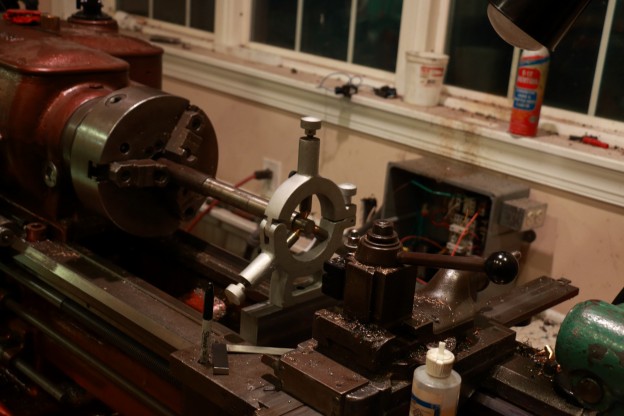 And it done, except for the orange paint. 🙂 I did test the accuricy. I turned a rod for about a foot. From one end, to the other was about .002″ off. Not great, but I really need a steady rest.