If you are going to be operating any kind of manufacturing equipment (like a lathe or mill) in your garage, then you are bound to need to produce three phase power. As I found out when I was looking into getting a lathe, there are many methods in turning singe phase power into 3 phase power.

So, the complete opposite of that is a VFD (variable frequency drive). It is a device that is used to control the speed of a 3 phase motor. These devices can generate the 3rd leg if it is not there. These devices will produce perfect 3 phase power. They do this by converting the ac voltage to dc voltage. Then it generates pure 3 phase power. While these devices aren’t super expensive, you must have the unit connected directly to the motor. This means that if you have more than one motor, you will need a vfd per motor.

Idler motor sizing can be a bit confusing. First find out how many motors you want to run at once. The motor needs to be at least as big as this number. So if you have a 3hp motor and two 1hp motors, then you will need at least 5hp idler motor. But this doesn’t take into account starting amps. The idler motor should be 20%-30% higher than the largest motor. So if you are only starting the one motor at a time, you would need at least 3.6hp. Unless you wanted to start all of the motors at once, then you would need at least 6hp because you are starting 5hp worth of motors. But, to get more confusing, you can use a smaller motor to jumpstart bigger motors. So technically, you could use a 3hp idler motor; start one of the 1hp motors, then start the 3hp motor. The 1hp will act as another 3 phase convertor. 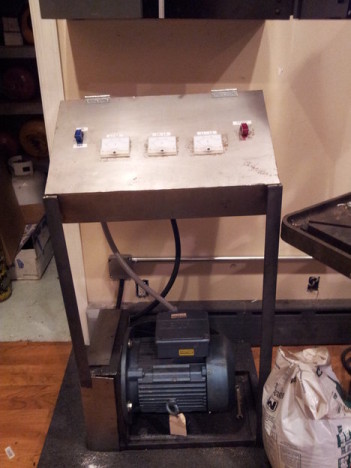 Yes, I did watch too much Star Trek as a kid. Now I just need someone called Scotty to man it. 🙂 Anyway; let’s first look at the motor. It used to be a gear motor, hence the face mount. I saw this motor when I was picking up my lathe. It was only a $100 and it is a 10hp motor. These types of weird motors make great idler motors. There cheap because you usually can’t use them for anything else. I got mine at hgrinc.com, but you could also look at surpluscenter.com. I found that when I start my lathe, which is a 5hp motor, it draws around 20 amps from the phase converter. 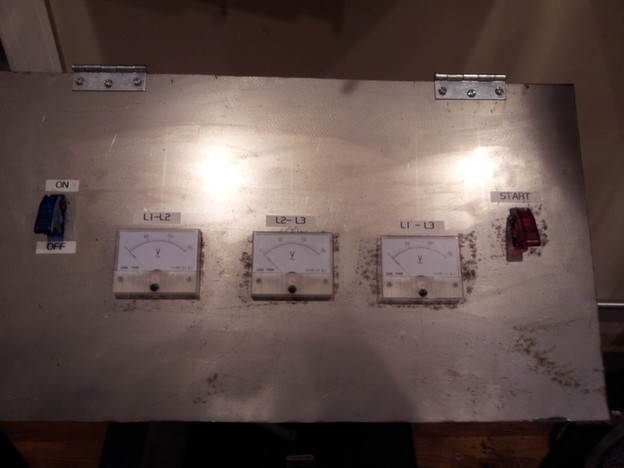 Now, what’s up with that top panel? Obviously, I got the on switch to the left, and the start switch on the right, but what are those indicators in the center? These show the voltages across the T1-T2, T1-T3, and T2-T3 lines. This shows me if the idler motor is out of balance (remember those running capacitors?). Do not try to measure line to ground voltage. My dad (who runs a hvac company) and I had an argument about this. When he works on 3 phase equipment, he would measure line to ground to see if the equipment is receiving proper voltage. This works for L1 and L2, but does not work for L3. You will measure 220 volt, unlike L1 to ground which would be 120 volt. Remember; this is a motor, not a transformer. They have different wiring. 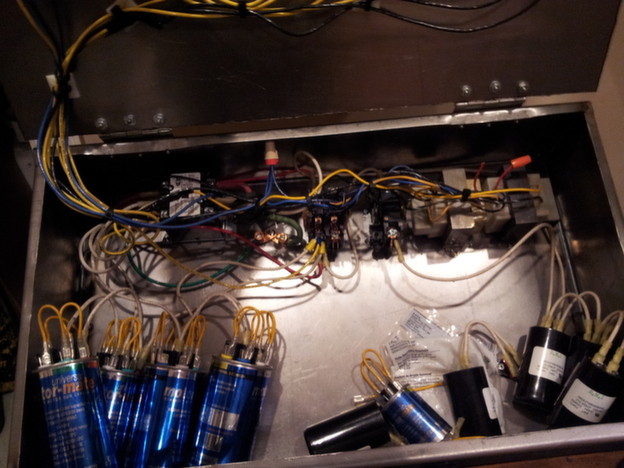 Yea, that’s some messy wiring. Now I made most of this with stuff I had laying around. The running capacitors (to the left) are a type of multi capacity capacitor. My dad hates these because they tend to overheat and blow up, well leak. So I saved them from the trash and used them in this. To the right are the starting capacitors. I bought these at temcoindustrialpower.com. Now at the top left is the running relay (sorry, contact, even though that’s a stupid distinction). Top right are two 24 volt transformers. One for the starting relay and one for the running relay. And in the center are two starting relays. I was trying to make it so that the running relay won’t start until the starting switch is fired. Unfortunately, the running relay doesn’t have an auxiliary relay, so it didn’t work. This whole setup could be made simpler if I were to use 220 volt relays.